What is consciousness? This is a very difficult question, and one subject to very loose and muddy definitions. Indeed, different people have either unformed ideas on the matter, or have widely differing concepts of the concept of consciousness. Viewed from a purely practical perspective, part of the question can be answered by examining which animals and humans clearly have evident and provable periods of consciousness and unconsciousness, as defined by sleep and general anesthesia. The list below describing recognized consciousness in mammals is very informative.

No-one expects a mouse or dog to have the same intelligence, self-awareness, tool-making, society-building, environmental manipulation abilities as a normally functioning human. Indeed, while they possess the same basic brain structures as humans, as well as expressing basic emotions such as fear, contentment and happiness, no animals other than humans have ever developed the use of tools, or have purposefully changed and influenced their environments as have humans.

The true meaning of “consciousness”

… wakefulness refers to the sub-state that permits open eyes and a degree of motor arousal (i.e. wakefulness defines the level of consciousness); awareness refers to the sub-state that enables experience of thoughts, personality, memories, and emotions (i.e. awareness defines the content of consciousness. Although wakefulness and awareness are intimately connected—in general, one has to be awake to be aware—it is possible to identify circumstances under which they are dissociated: … (Gawryluk 2010)

All the above makes it possible to provide a definition of consciousness in terms of a computer metaphor as below.

Consciousness is similar to a computer operating system which when present and active, makes programs like properties of mind such as emotions, personality, awareness, and memory possible.

This is a clear and logical way to define consciousness without the necessity of any real understanding of its nature, or the level of neuronal complexity required to manifest consciousness. One thing we certainly do know about consciousness, is that more than 80 years of medical science repeatedly reveals consciousness to originate, or be generated by structures within the brainstem, the evolutionary most primitive part of the brain (see diagram). 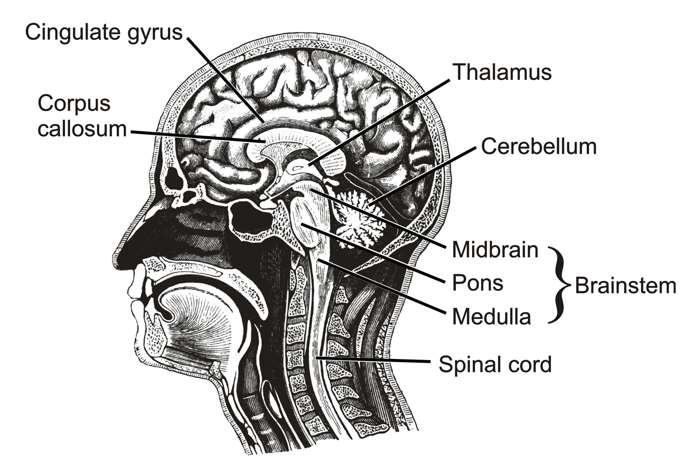 The “brainstem” in the human consists of the midbrain, the pons, and the medulla. This is the most primitive part of the brain, as is evidenced by the presence of the same structures and functions in the brains of all vertebrate animals such as fish, mammals, reptiles, and birds.


This is the way consciousness is viewed in the book “Anesthesia & the Soul”. Readers can download the book by pressing the button below.